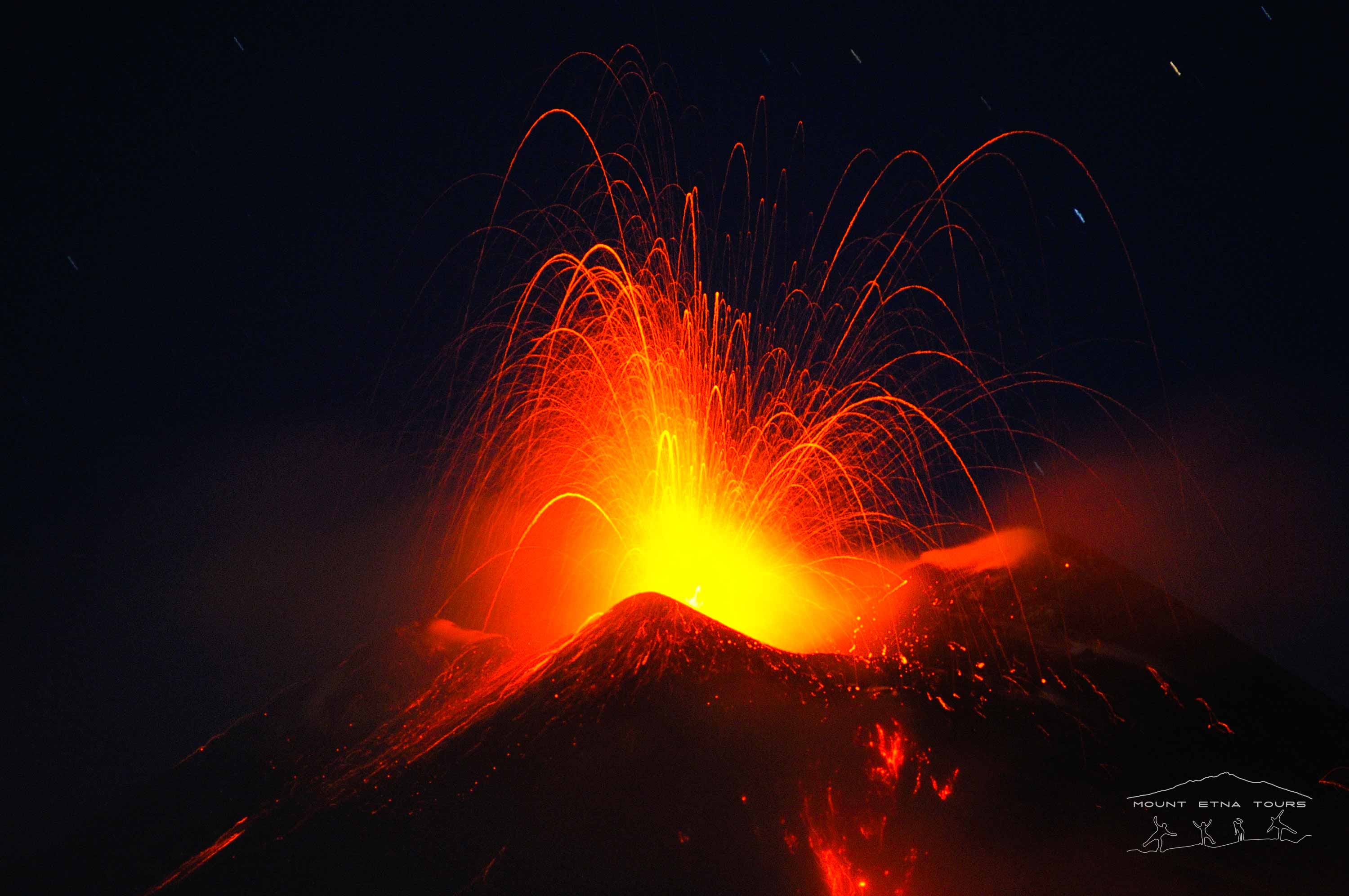 Etna, in dialect “a muntagna” ( the mountain ), has always been considered as a loving mother for Sicilians, it’s volcanic activity dates back more or less 500.000 years ago.

Today with more than 3000 meters high and with a surface which extends for more than 1250 kmq, Etna presents a complex structure and an uncommon shape. There are 6 active craters located on the top and other 300 side craters, extinct nowadays.

Etna offers to all climbers an extraordinary landscape richness, embellished by a variety of vegetation and by the several animal species – most of them small size – like Foxes which are the biggest mammal on Etna. This variety of vegetation and landscapes depends firstly from climate conditions which are related to different altitudes but also thanks to sequences of lava flows, woods and fields of crops. A typical Mediterranean vegetation, made of Citrus groves, Vines, Olive trees, Cheery trees, Apple trees and Pistacchi groves mixed up with tight woods rich of Chestnut trees, Larch trees, Oak trees, Beech trees and Birch trees. After reaching quote 2800 meters, your eyes will fall in love with a volcanic wasteland where the continuous volcanic activity stops vegetations from growing. Among the typical species of Etna’s vegetation there are the Astragalus siculus, the Senecio with it’s yellow colored flowers and the Mount Etna broom which is the one of the most colonizing plant after lava flows.

Sicilians love and respect Etna: they are fascinated with it’s charming presence. Local people are proud of the Regional Park and of their Mountain of Fire which often offers gorgeous lava shows to admire especially during the night; but Sicilians know really well the power of it’s lava flows, which during the past years has destroyed cities, vegetations, woods and fields of crops.

And for this reason to Etna’s history are linked fatalistic memories. Ancient beliefs are often related to faith, superstition, myths and legends. Story goes that Etna used to be Efesto’s home or Vulcano’s Home, god of fire, natural element then given to humans; other stories talk about Cyclops, giants with one Eye that use to forge lighting bolts for Zeus. Nowadays, just like in the past, people of the Island pray Saints to protect them from Lava Flows. Even Saint Agata, venerated patron of Catania, founds it’s stories bounded to the Volcano. Story goes that during 252 A.D. eruption, one year after the martyr of the Saint, people from Catania took her veil and invoked her help. The Eruption stopped immediately…

The presence of the Volcano on the Island, isn’t felt only during eruptions, people that live near by Etna ( Giarre, Bronte, Randazzo, Catania and so on..) are used to Etna’s ashes, gas columns and steam that is created on top of the volcano, often confused with clouds.

As for every natural phenomenon, during centuries Etna has generated different emotions among people: fear and veneration, but it has also raised feeling and interest of Scientists, Researchers, Adventurers, Tourists from all over the world which fall in love with it’s majestic beauty 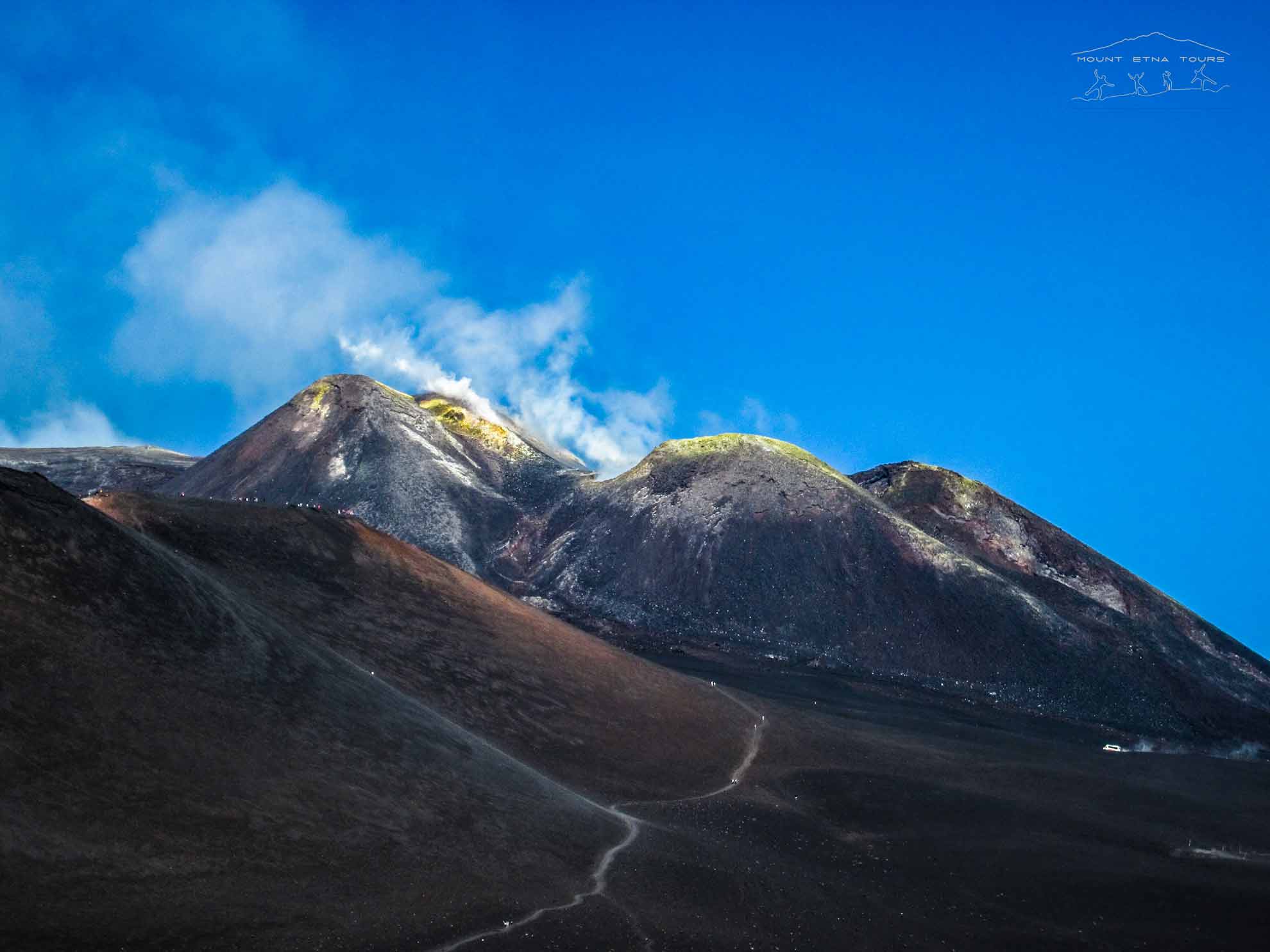 Thanks to it’s majesty and landscape variety, which characterize Etna, we can organize all yearlong different Excursions on Mount Etna.
Among our offers there are Mount Etna Excursions that can bee experienced by anyone, starting from short walks and travels with our vehicles, or more challenging Excursions, for more experienced people.

In any case everybody will have the opportunity to admire the peculiarities of the European highest active volcano with it’s suggestive landscapes: from the most ancient lava flows, nowadays covered by woods and vegetation, to old craters or recent lava flows still black and with no vegetation, which help us understand how powerful is Etna.